Garden River fly fishing for King and Pink salmon in Sault St Marie, Canada is some of the best in the Midwest Region. Garden River fly Fishing for Salmon on the  First Nation is the best in the Midwest. Why? Privacy is the reason. We fish very close to the mouth of the Garden River on First Nation lands giving us first shot at King, Pink and Coho salmon and steelhead all on private property. Due to the proximity to the St Mary’s River the fish are fresh and much more likely to take a fly. The lack of any fishing pressure adds to that success!

In 2015 the season looked to be dismal at best. When I arrived in Sault St Marie my native friends told me there were no fish at my two favorite beats. This was unheard of in the 16 years past. So needing fish by Saturday, Thursday I went to the public part of the river, right below the falls, Eleven Mile. There I found enough pinks to catch fish on Saturday with the family trip I was running. Friday we spent the day checking the river on the native lands. We found enough fish up at high in the reserve on private land to keep going. Saturday we started our Garden River guided fly fishing trips. As the days went on Pinks and kings constantly dribbled in almost every day. Fly fishing for salmon was pretty good, not stellar but definitely good enough as clients continued to rebook their spots for next year. It was interesting to see fish moving upstream very late and in very low water.

Rain was hard to come by on the Garden River this year. We had only one decent rain mostly just beautiful warm blue bird days. The one rain event we had was the night before the kids trip on Sept 19th. That moved fish! We had a push of pinks and kings and hooked 11 steelhead in two days. The last three groups saw change every day. The fish moving up river were constant, small in numbers but we saw them every day. They would immediately start to spawn ,creating new gravel fishing opportunities. The best situation you could find was a hen working gravel that attracted the traveling males. You could get a few shots at them and if successful the fights ere epic.

The late run and the low water made the streamer fly fishing for king and pink salmon slow this year. They just weren’t spending much time in the pools. We did get a couple of really good king salmon but not the numbers we normally get.

Though a little more difficult than usual the Garden River produced good fly fishing for king and pink salmon and at times for steelhead. 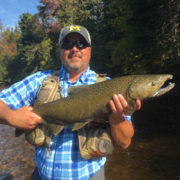 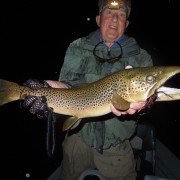 Nymphs and Streamers
Scroll to top