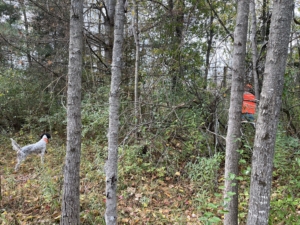 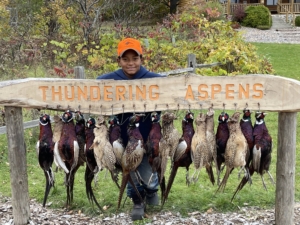 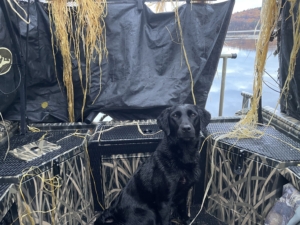 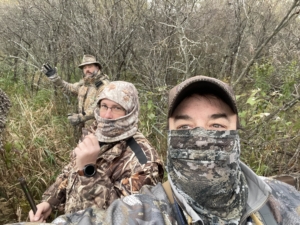 As I’m sitting here writing this, there is over a foot of snow at my house and it looks like the only thing that the grouse are going to be doing is snow roosting for the immediate future.  As the nights get colder, it appears Old Man Winter has set into northern Michigan.

I am going to write this recap in two parts.  The first will be more of an overview and the second one (on the website) will assist you in maximizing your opportunity for a guided hunt next season with us.  Once again, thanks for the opportunity to serve your guiding needs on the fly and the wing this year.  Now to the meat and potatoes….

This season was a full one and seemed to race by quicker than ever.  At the end of the summer, there were mixed views on how the season would fare.  Many claimed to see underdeveloped, late broods of grouse but those that I found running dogs appeared to be strong and well-developed.  There were lots of local woodcock around to train on around the nesting quiet period and that helped with young dogs in the kennel.

On the waterfowl side of the equation, it pretty much stunk.  Our warm fall kept birds up north and then the cold weather settled in after the end of the early season.  With the late weekend season a week away, it still doesn’t look like its going to be worth taking clients’ money for the prospect of a few shots.  As I reflect on this more during the offseason, I will continue to find ways to make waterfowl a viable option in an area like ours without direct flyway migration.

So how did the upland season fare?  I would say it was a decent season in the northern lower peninsula.  I only count individual birds flushed and not re-flushes.  I believe it gives a better reality for clients for expectations on a hunt.  Having said that, we averaged only 10 grouse and 7 woodcock flushes per day this year.  That is down about 5 flushes from 2020 and is the result of a few things, one of which was losing 10 days of guide trips due to my daughter and grandson getting Covid.

As it pertains to grouse, some will say that we are beginning the downward side of the ten-year cycle in birds.  If you believe in the cyclical nature of grouse populations, then the top years typically end in a 9 or a 0, making this the first year of the decline.  I personally don’t hold a lot of weight in this theory as I believe that it is much more complicated than that.

In my experience and years chasing all types of upland birds, population fluctuations are caused by a myriad of reasons.  Cycles of timber harvesting, resulting in more or less prime, early successional forest, have a lot to do with numbers.  Grouse and woodcock need these young forests for raising broods and providing protection and food for their young of the year.

Late frosts like we had in May meant many of the areas that are usually hanging heavy with autumn olive berries didn’t have any fruit to provide.  While grouse area  generalist and eat many different things, I have always found a great correlation to grouse and autumn olive.  Of course, timberdoodles just need moist ground and worms and other invertebrates.

Last, and certainly not least, is hunter pressure and a lack of management of the resources.  In recent years, digital “scouting” applications have brought a different attitude to some folks who don’t want to put in the boot leather time to find prime cover.  Unfortunately, this results in getting away from truly knowing covers and the birds in them.  In saying this, please know that I use these applications to narrow down the possibilities.  However, it is the many hours in the truck and on the ground with my dogs that helps me intimately know the covers I guide.

This last one is a double-edged sword as we want more hunters and need engagement for the future of our treasured sport.  However, when I can go into a cover that I know has 8-10 birds in it and come back a few weeks later to find none, I know that they have either been wiped out or pressured out of their ideal cover and conditions.  This forces them into secondary cover that does not protect or provide for them as well as their primary one did and results in higher mortality rates as well.

Well, waterfowl season won’t get much space here because there really wasn’t much to write home about.  During early goose and teal there were some good numbers of birds.  I spent one morning with friends in field and saw close to a thousand ducks (many mallards and not yet in season) go into a field.  Where those ducks went during the regular season I don’t know.  One thing I do know is that this Fall was warm like the last few and that warmth hung on for a long time.  Reports of birds in Canada and the Upper Peninsula were good but there was nothing to force them to come down to us.  That is, until around Thanksgiving when our first real cold snap happened and some had decent hunts.  After that, the warmth returned and the next cold wave that we are experiencing right now, came after the main season closed.  With a week until the late weekend season, it is a crap shoot on whether it is worth even getting out.

Thundering Aspens (TA) never ceases to disappoint.  With wild-released birds that fly like those in the West and plenty of opportunities to take home meat, it continues to be a great option for hunters and dogs new and old.  This year found more clients not only looking at TA for its 3-hour hunts, but also for the combination of TA with wild birds as well.  This is something to look at if you want to chase the wildest pheasants and quail this side of the Mississippi.  Additionally, we chase chukar in the Spring, which is great training to get your dog out and knock the cobwebs of winter off.

Overall, the Fall is never a bad time of year.  Time out with friends, family and clients in the grouse woods or the marsh is always something I yearn for the other 8-9 months of the year.  Cooler weather earlier in the season would be nice for not only the birds, but the dogs and hunters as well.  However, just as with any of our outdoor pursuits, remembering why we are out there and enjoying the experience keep us coming back for more.

For Part II of this season wrap-up including guidance on getting out with us next season, please head on over to the website or click here.

Have a great winter!