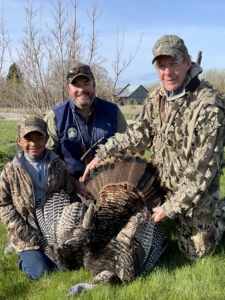 When we last met, the family turkey hunting was moving north from my dad’s place in Pentwater to a weekend visit with my family in Traverse City.  It was a great time spent with Papa Ted, but definitely culminated in our planned hunt to get my dad a bird on Sunday.

The plan was to set up in some orchards that I have permission to guide and hunt.  I knew that there are historically turkey there, but hadn’t gotten to scout this specific parcel this year.  Half of the battle, however, is knowing what types of elements attract turkeys such as roosting, strutting and bugging areas.

This morning was special.  We would have three generations with us as my son Asher wanted to join because he will likely start hunting turkey next year.

As we pulled into the parcel, I knew where the open meadows were and we parked below a great, hidden meadow with hardwoods adjoining it.  After quietly getting out, I hit the wingbone call a few times with some yelps to see if anyone was home.

Within a few minutes the air erupted in 4-5 gobbles and it was game time!  I had my dad and Asher sneak up to the the meadow along some hardwoods as I continued to call from behind them to draw the toms in.  As they crept low up the hillside, they noticed a wiley coyote was also coming into my yelps as well.  As the dog noticed them, he quickly turned tail and ran away.  I wish he had come in about 5 minutes later as we could have doubled on him!

Back to the story.

Dad and Asher continued up towards the crest of the hill as I coaxed the gobblers in with some sexy yelps and clucks from my Fred Cox Widowmaker and purrs from my John Tanner trough slate call.

When they were almost to the crest, Dad froze and had Asher do the same.  Dad ever so slowly turned to the left looking down into a shallow wooden valley next to them.  As a couple one year old Toms came through the woods, the quiet morning air was cracked with the sound of Dad’s long gun and one more bird was in the bag.

After a few pictures, we left to go home.  A midmorning hunt of less than an hour and we were back for coffee with the family and memories to share!

Takeaway:  Time spent with family around hunting traditions is valuable no matter the amount of time involved.  The memories last a lifetime and even though this was not a long hunt, Asher is hooked to kill a turkey next year.  If you combine knowledge of your quarry with quality calls and techniques, you increase the opportunity to bag any animal you are pursuing!

Get out and make memories in the woods and on the water!

Until next time, keep your powder dry!