Shortly after the Christmas holidays ten of us took off from the USA and headed to Argentine Patagonia. Our airport destination was San Marin de las Andes. Our ultimate goal was to arrive at Spring Creek Lodge in Junin de los Andes. As a result we would spend the next eight to eleven days pursuing brown, rainbow and brook trout with mostly dry flies. We were there for dry fly fishing in Patagonia.

Our host, Gustavo Heibaum, owner of Andes Drifters assured me when we booked this trip that we would be in the middle of the best part of the season for dry fly fishing in Patagonia. Above all we should experience the fabled dragonfly hatch! Our group consisted of three couples and four single men including my son, Zach and I. The group was mostly comprised of very experienced anglers except one wife. Above all she was coming to both increase her fly fishing abilities and enjoy some non-fishing activities.

The Waters we fished

The location of Spring Creek Lodge near Junin is ideally central to a lot of very well known lakes and rivers in northern Patagonia. Famous rivers abound in the area. The Rio Chimehuin, Malleo, Collen Cura, Alumine and Calefu are all within a reasonable driving distance. Lago Troemen, Lolog and Lacar have great dragonfly hatches and big numbers of very good sized trout. Over the next ten days some or all of us fished most of these waters.

As mentioned earlier, this is dry fly time. Consequently I couldn’t get much response on streamers. The fish were just plain looking up! Broke everyone’s heart…not! When dragonflies were hatching, those imitations were the ticket to success. The number one pattern was Gibson’s Dragonfly an Orvis bug. On the rivers and in the lakes with no hatching dragonflies the usual top dry flies were Fat Alberts in Black, Brown and Pink. The PMX in large sizes 4-8 tied either in a Royal or Peacock bodies produced a lot of fish. After these two the Chubby Chernobyls in a variety of colors was hot. In other words these three flies were the only dries needed 95% of the time.

Dry fly time meant six weight rods were the stick of choice. We had more than average wind many days. This was more than we would normally expect. However even with the wind, most of us stayed with the six weights and fought the accuracy issues. While difficult at times we still managed to catch a lot of trout. The line of choice for most of us was Scientific Anglers Amplitude floating line. It’s a half a line weight heavier than normal. It did a great job fighting the wind and turning over those big flies.

The Calefu and the worm!

We were lucky enough to able to fish the Calefu, it requires a two or three -nights camping trip. It runs almost entirely through private property. The Calefu can only be floated in spring or fall as it drops so low that you can’t get rafts through during the summer months. Firstly, it’s a superb trout stream with lots of pocket water in the beginning half. Secondly, the allure of lots of trout and the natural beauty of the river and it’s surroundings make it one of the best floats in the area. Massive rock out cropings look down on you while you are throwing dry flies to trout up to twenty-two inches long! In other words it’s a little slice of heaven!

In addition to having this water available we were lucky enough to hit the beginning of the worm hatch. Small chartreuse worms congregate on the willow trees along the rivers and devour their leaves. In slower stretches these little worms provide great protein to cruising trout. Plopping a worm in to slow water will usually cause a trout hunting worms to turn and come to the offering. Browns and rainbows of significant size can be had by fly anglers.

This trip was the second time that I’ve had a guest that took advantage of the non-angling opportunities that Gustavo offers. For example our guest rode horses and had a private workshop with a world renowned photographer. She kayaked, hiked, got tango lessons, learned about Argentine cooking, and visited art galleries. Along with that she mastered a fly rod and caught a bunch of trout during their 9 day stay. Argentina isn’t just about fishing!

In conclusion after having spent forty plus weeks chasing trout in Patagonia, this time frame was the very best I’ve seen for the dry fly angler. Andes Drifters has been my choice for at least a half dozen years as the very best outfitter in Northern Patagonia for the discerning angler/ traveler. If you have Patagonia on your bucket list let Hawkins Outfitters and Andes Drifters design a program for your specific wishes and desires. You’ll be happy you did! 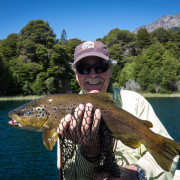 Very often during this time of year I find myself anticipating my annual trek to Argentina. I go to Patagonia every year to fish for Brook, Rainbow and Brown Trout in lakes, rivers and spring creeks. We base out of Spring Creek Lodge near Junin de los Andes. Most trips also include a short camping trip to access waters that can’t be floated in one day. We usually fish dries (with or without droppers) and streamers. Depending on the water you fish one or the other may be more productive. Fishing also varies with the time of year, trout season opens November 1st and closes May 1st. Remember, the seasons are reversed, November is spring, April is fall.

Some years I also go to northern Argentina to fish for Golden Dorado on the Parana River. Both locations are among my favorite places in the world to fish. At both locations the Argentina experience is the full package, the fishing, people, food, wine, guides and equipment are all top shelf. Every need will be met and most likely exceeded!

In 2019 we have two hosted trips, one to each location. Jon Ray and Ed McCoy are hosting a group at Parana on the Fly, January 5-12, 2019. They have one spot available. The cost is $4750 for 6 days, seven nights all inclusive except travel and gratuities. I’m hosting a trout trip to Patagonia with Andes Drifters from December 29, 2018 to January 5-7, 2019. The dates are flexible you just need a minimum of 7 nights. The cost is $5250 all inclusive except travel and gratuities. This is super prime time for dry fly fishing, especially the dragonfly hatch. Big fish eating on the surface during the day! I have two spots left!

Watch this short video on trout fishing in Patagonia. It will wet your appetite.