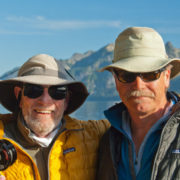 Last Sunday morning Steve Ladd, longtime friend, client and world traveling angler passed away from a heart attack in the kitchen of our river house. In the last 25 years Steve and I fished together very often, some years as many as 50 days. Ladd was gruff and opinionated on the outside and warm and giving on the inside. He was always first to donate to causes helping the rivers he loved, the Manistee and Pere Marquette. He contributed time and money to efforts to teach people to fly fish. He worked tirelessly for Project Healing Waters, getting wounded vets on the water fly fishing.

Steve was one of the most optimistic guys you would ever encounter, he believed that the Cubs would win the World Series, that his next cast would result in a 30 inch brown and that the Republicans would someday control the White House, Senate and House. Amazing how things came true.

Steve’s presence will be missed by many of us. Brown trout however are elated the world over. Rest in peace Laddie, I hope there are great trout streams in heaven