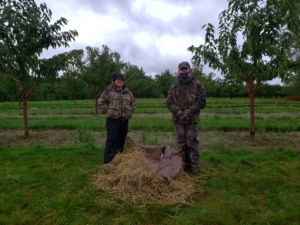 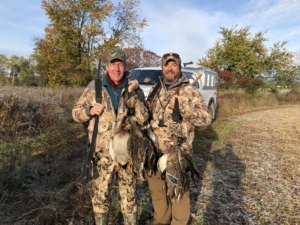 Duck and goose hunting season is off to a fast and furious start!  Green and blue-winged teal moved down early along with geese for some great shooting during the early season.  As the goose season has progressed, I have seen large flocks moving around every day and many of them are migrators.  It looks like our weather is going to stay pretty nice (read “not prime waterfowling weather”) for the next week.  However, the week after that has highs that are dropping into the mid-40s which should push down some new waves of waterfowl.

For geese right now, locating fields where they are feeding is the ticket.  With more and more fields being harvested, this can vary by the day and be more of a challenge than early season.  Secondarily, you can pattern the birds and find a field that they are flying over which looks nice.  You may be able to entice them in with a good decoy spread and calling.  Corn fields are the ticket right now in our area.

Duck numbers have also continued to be strong with plenty of wood ducks and mallards around.  Take advantage of this warmer weather in the next week to chase those woodies before they move out later this month.  Flooded timber, creek bottoms and small potholes with trees around them are great, especially if you can find oak trees.  The acorn drop has been crazy and the woodies are gorging on them right now.

This time of year is a great time to check out the Drake EST Heat-Escape Full Zip 2.0 jacket.  As a member of the Drake Elite Field Team, I love their gear and recommend it for waterfowl hunting during most of the season up here.  You can layer underneath it for early to mid-season.  Later in the season, some of the heavier Drake gear can do the job as well.

It’s a great time of year to hunt waterfowl with so many open seasons.  The duck hunting will only get better as the weather turns and we get into November.  Get out and enjoy the weather and give Cherie a call at 231-228-7135 if you want to get out later this Fall.  For more information on pricing, click here.