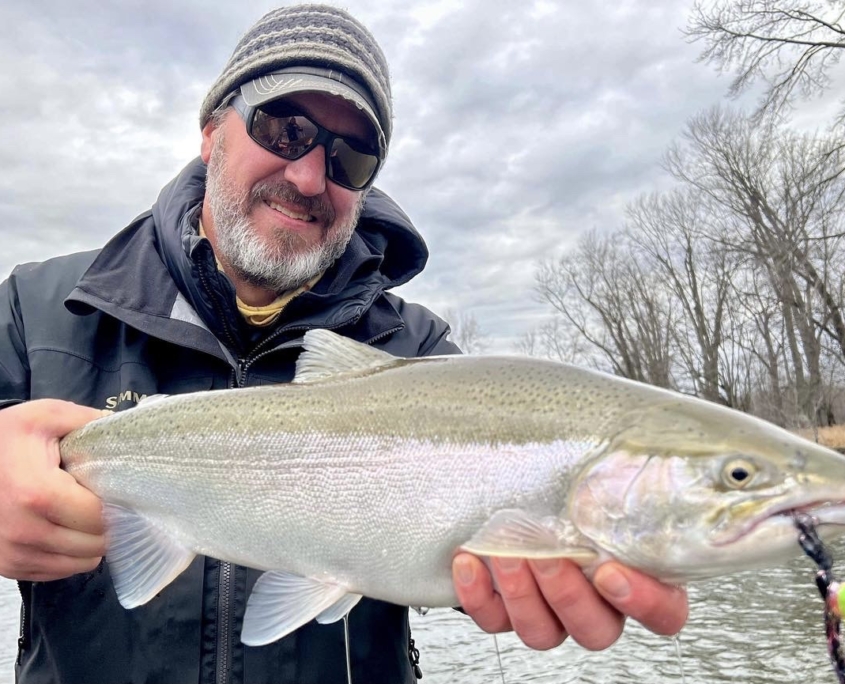 In the last ten years many improvements have come about that have increased our success at hooking and landing steelhead on a swung fly. What is swinging flies. It’s the classic and purist form of fly fishing for steelhead. The improvements are mainly in the fly lines we use and more importantly in the flies we present to the fish.

The classic Pacific Northwest swing approach involves  presenting a fly, in the midwest anyway, subsurface at a 45 degree downstream angle and let the current “swing” the fly in front of the fish. This is the same method used to catch Atlantic salmon on the East coast and Europe.

The vast majority of the time indicator and chuck and duck fishing for steelhead is more productive. Imitating eggs and dead drifting an offering down close to where the fish are holding is going to generate more interest. Swinging something larger and on the move, probably higher in the water column then they are, requires more of a commitment from the fish.

So why bother? In my mind two reasons. First you’re actually fly fishing, making a true fly cast and asking a fish to come and get it. Secondly the eats can be and generally are thrilling. At times they almost jerk the rod out of your hand. There’s another side benefit that many of my anglers comment on, it’s relaxing. You can look around, carry on a conversation and generally not pay a lot of attention when the fly is in the water. You’re going to feel the strike! 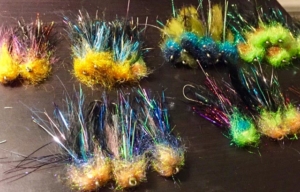 The necessary equipment to start your swing career can be very simple or you can step into the two handed spey rod world. If you do that you’ll most likely be investing in some new equipment. A two handed rod to start with. There are many on the market.I prefer the new Mission series by Orvis in either a 7 or 8 weight. You add a large arbor big reel to hold the running line, a Skagit Head and the sinking portion of the fly line. Then you’ll need all of the’s aforementioned lines.

The Skagit lines I use are by Scientific Anglers and weigh between 510 and 580 grains. I attach those to a Orvis Mission running line, .031 in diameter. Finally I tip that with Scientific Anglers Sinking T-14 line in various lengths. Mostly 6, 10, or 12 foot lengths. Finally I use 16lb fluorocarbon to create a 3-4 foot leader to which I attach the fly with a fixed mono loop knot.

If you want start swinging without diving into the two handed world then get a Scientific Anglers Cold Water 25 foot 250 grain sink tip line.They swing pretty well and can be delivered with either a seven or eight weight rod. 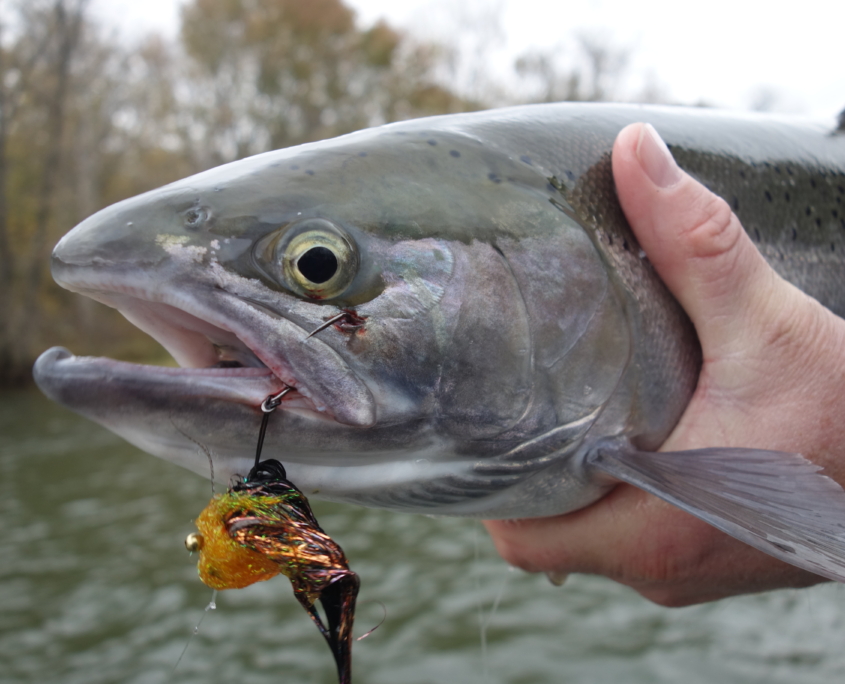 Head to the River!

When outfitted correctly head to your favorite steelhead river. Look for runs that even more even flows and if you can find even depths so much the better. Deliver your fly 45 degrees downstream, let it swing until its straight downstream for you. After it stops swinging let it “hang down” for 3-5 seconds in case a fish has followed it and is contemplating eating it. The take a big step downstream and do it again!

This has been a very brief introduction to a very exciting method to hook steelhead. This sport is growing very rapidly in the Great Lakes. In my boat we are up to using the swing method about 50% of the time.  In future articles I will outline various parts of this method in greater detail. Especially fly patterns and reading the water.

In the meantime email me with any specific questions you have at chuck@hawkinsoutfitters.com.