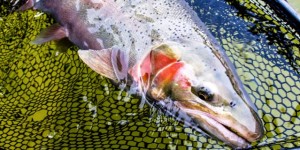 They are pursued with fly, bait and lures of all types. For many anglers a  Manistee River steelhead fishing trip is an annual event.

The Effects of Logging

Manistee River steelhead fishing is heavily influenced by the logging onslaught against our forests beginning in 1840 and proceeding until about 1900. During that time some 160 billion board feet of wood were harvested. The wood was more valuable than all the gold found during the California gold rush. From 1869 to 1900 Michigan was the number one wood producer in the United States.

Most of the cutting was done during winter when the logs were easier to move. In spring, because we had no roads or railroads to begin with, the rivers were used to transport logs to sawmills. The white pine logs were the most desirable because they floated better than hardwoods.

Sand is Our Enemy

This has had a long lasting effect on Manistee River steelhead fishing and other Michigan rivers as well. The floating logs tore up the river banks exposing huge sand deposits that ended up in the river beds reducing spawning habitat and biomass (food) production. It also left a tremendous amount of wood in the rivers. You still see thousands of saw logs in and around the river.

Adding to the amount of wood we deal with is the invasion of the Emerald Ash Borer that started in 2002. The entire Lower Peninsula basically lost millions of ash trees to this invasive species. Manistee River Steelhead fishing has been very effected by this the last couple of years. The dead trees are now beginning to fall in the river in large numbers. They are altering steelhead runs and adding to the woody debris.

When I arrived in Michigan 28 years ago I was told that our rivers were too deep and the runs too short for conventional steelhead fly fishing.

Chuck and duck was born. Essentially using lead and a thinner line to get egg and nymph flies to the bottom. Lobbing lead versus fly casting. To a great degree this was the number one method for Manistee River steelhead fishing.

While a very successful technique, it is very limiting as to where you can fish due to our very woody rivers. It also concentrated the fishing pressure because there were only so many places to do it.

When steelhead fishing behind spawning salmon it is by far the best method. It also works well in those short deep runs.

Many anglers were searching for ways to catch steelhead with more traditional fly fishing methods. We were also motivated to be able to fish more of the river.

Indicator fishing, as a specialized way to nymph, has began to take hold in the last ten years when fishing for Manistee River steelhead. This setup is unique to the Manistee River and would not fish well in smaller waters. (diagram to follow)

Larger indicators using shot strings increases success. Gets a fly or bead down quickly and keeps it there while you feed out line. See the diagram to the right.

The Indicator Set Up

The set up starts by using an 8 to 20 gram float depending on how much weight you want to support. Use float stops to control the depth of your fly by moving the float. I put the float on 12 feet of 12-15 pound test fluorocarbon and put a swivel on the end. On that line I put 2-4 larger split shot. Size of shot is related to the size of the float.

To the bottom swivel I tie on a 14-18 inch section of 10-12 lb test fluorocarbon with a swivel at the end of it. On this section I spread an array of split shot decreasing in size until I reach very small steelhead shot next to the terminal swivel. About 18 inches of tippet connected to the bottom swivel and tipped with an egg fly or bead has me set up for the most effective method of Manistee River steelhead fishing. We use beads, nymphs and yarn flies. 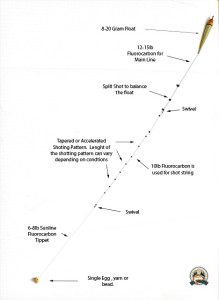 The Rag Style Clown Egg  is a deadly fly for Manistee River steelhead fishing. It is available for sale at Orvis or if you like to tie your own check out the step-by-step video on our Youtube page.

We have also begun to use Alaska style beads as egg imitations.

Indicator fishing expands the fishable water tenfold. It enables an angler to fish in the woody debris that lines the banks of the Manistee River.

The Evolution of the Swing in Michigan

Lots of anglers have swung flies through the years with limited success. Manistee River steelhead fishing using the classic west coast swing lines and fly patterns was a tough proposition. Fish were caught but not consistently. 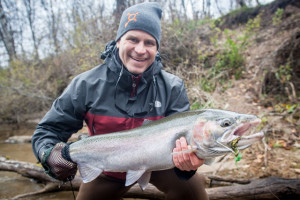 Several things have happened in the last few years to increase our success. A new Scientific Anglers Freightliner Skagit fly line works beautifully with 12-14 foot spey rods giving us a great swing with minimal belly. We run 480 to 560 grain lines on 7 and 8 weight rods. 10-12 feet of T-14 on the front of the Skagit line works well in the 4-6 foot water we typical focusing on when swinging for steelhead.

Flies for the Swing!

The second major breakthrough was in the flies we are using. Pioneering fly tyer, Kevin Feenstra has taught us the value of using large amounts of Flashabou on our streamers to get takes. Examples are the popular Grapefruit Head Leech, and The Perch .

Cast your fly to likely areas quartering downstream. Set your reel’s drag lightly so that a fish can grab and turn with the fly before you set the hook. If you lift when you first feel the bite, you won’t hook up. This is a great way to keep from making this mistake.

Steelhead techniques in the Great Lakes and the anglers using them have matured over the last twenty years. Many more anglers are interested in the quality of the experience as much or even more than the numbers of fish hooked. Swinging flies is the pinnacle of the quality experience. The old saying, the tug is the drug, is the truth. When 10 pounds of fresh steelhead grabs your streamer you’ve achieved one of the top ten exciting events in fly fishing.

I hope you use this information to have a better Manistee River steelhead fishing experience.