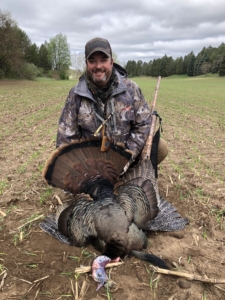 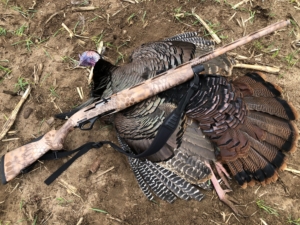 I’m just going to say it – I love Spring!  As the days start to lengthen and we see more sunshine in February, my heart gets excited for the end of April.  I know that then Spring will, for the most part, be here in northern Michigan.  The other reason that I love Spring is that the woods comes alive with the grouse drumming and turkeys gobbling!  That means turkey season is here!

This year was a special year as I was going to have the opportunity to hunt once again with my Dad around his place in Pentwater.  Then he would return up here to see his grandkids and hunt once more (if we didn’t fill our tags earlier) with my 8 year old son Asher.

As many of you know, hunting with your parents and kids is a thrilling and unforgettable experience that should not be overlooked.  Your kids get to hear stories of when “you and grandpa” hunted.  This will get them excited to spend time with you and their grandparent doing a healthy outdoor activity.  It is also a great opportunity to talk about conservation and its importance to the game we love to chase.  Make it exciting for the next generation of hunters coming up and REMEMBER it is all about the fun with kids.  Don’t get caught up in whether you fill your tag and forget the opportunity with your kid on a hunt.

Day One – An Evening Hunt

I arrived on a Tuesday in Pentwater with a client’s pointing lab puppy in tow.  I had been training him for a client and after some fun work in my Dad’s driveway, the client and I met to go through his pup’s progression and send him home to work for a few months until it is time to get him on birds later this summer.

Even though evening hunts are tough, Dad and I hit the fields for some end of day action but were left empty-handed.  We had intel and permission on private land, but our friends reported that the turkeys had been hard to pattern in the last few weeks due to the weather.  As many of you know, the weather systems have been crazy this Spring with hot days followed by near-freezing nighttime temperatures.  Throw in some rain and snow and it sure is Spring in northern Michigan.

One thing that did appear to be true was that the warmer weather downstate looked to have triggered some early mating.  Therefore the boys were pretty quiet and starting to regroup in male cohorts.  It was time to grab dinner at the Brown Bear Restaurant in downtown Pentwater and make plans for the next day.

Up before the sun the next morning, there was very little gobbling on the roost.  We set up close to some birds early, but that didn’t pan out.  We decided to get in the truck and do some mobile spot and stalk.  This always provides some great conversation and time to catch up with Dad while looking for birds.

Day Two – The Action Heats Up

About 9:30 am we came on a flock of birds that were down in a valley that had a cut corn field in the middle and pines surrounding it.  After securing permission to try and sneak on them, it was game on!  We slipped through some pines, using the terrain features to hide our movement and then I crawled down the last 10 yards to get in position.  As I scanned the field, I couldn’t believe it but the birds were gone!  They had worked their way off but I knew they had to still be close.  Remember, this can be disappointing but don’t ever miss the opportunity to see if those birds might come back.

I decided not to put out a decoy in case the birds were close enough to bust me, so I picked up my Fred Cox Widowmaker wingbone call and gave a few yelps.  Sure enough, out of nowhere, the pine grove across from me erupted in gobbles and even a return hen yelp.  I initially thought that there might be a hunter up there until the birds continued to gobble and yelp, moving towards my hide.  To add to the mix, a surprise Tom started gobbling off to my left and up the hill from me.

As the action was heating up, Dad slipped down behind me and I continued to yelp and cluck on the wingbone and add purrs on my trough slate call from John Tanner.  These two calls are made in North and South Carolina and the craftsmanship is superb.  They hang from my neck allowing me to quickly get to my gun when the time is right.

As the birds moved to about 60 yards off in the field, it looked like Dad and I were going to be able to double up, something that does not happen often.  Yet as if on cue, the hen decided that she didn’t like something and held up just outside of range.  This made the boys nervous and, after a few minutes, they started going back up to their piney refuge.

Well, the best laid plans sometimes go awry, and we started to think that this stalk was over. That’s when the Tom from up behind us continued to gobble and locate my calling.  A few soft, sexy clucks and purrs later and he strutted to within 25 yards of me.

The woods erupted as my  Fabarms Waterfowler XLR sent the Winchester Double X Turkey load to it’s mark and 11 inches of beard and 1 inch spurs was on the ground!  After a prayer of thanksgiving, high fives and amazement at what had been laid out before us, we tagged the bird, got some pictures and headed off to the truck to spot and stalk some more.

Day Three – Quiet on the Roost

The next day and a half didn’t work out for us as we worked a few more birds to no avail.  However, we knew we had a few more days together as Dad headed up north to spend time with my family and an attempt for redemption.

Lessons from the Hunt:  Remember that turkeys are very stealthy as they move through the woods.  Just when you think that a set is not working for you and birds move away, all might not be lost.  There could be a Tom that is lower on the flock pecking order around and he might come out to try and get an “overlooked” hen to breed.  Always stay in the hunt until you know that it is no longer viable.

Tune into part II of this blog post as we talk about Up North birds, coyotes and young up and coming hunters.  If you want to try to still get a gobbler this season, you have until the end of May.  Give Cherie a call at 231-228-7135 for availability.

Until then keep your powder dry!