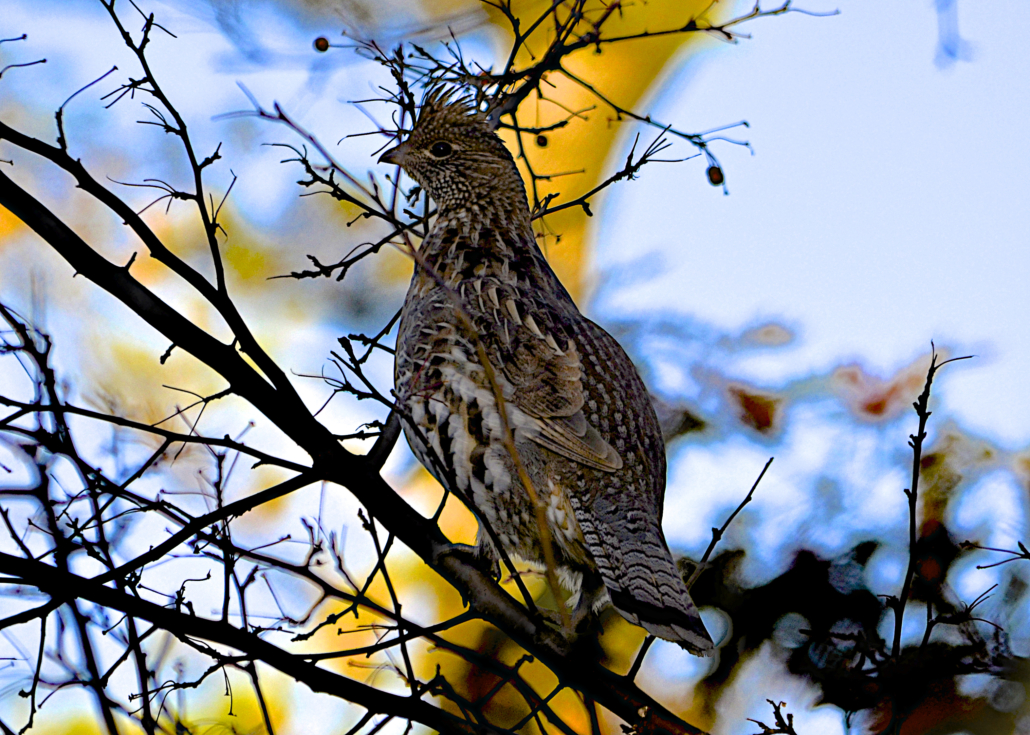 How will the King Fair….Winter’s Effect on Grouse

Winter’s effect on grouse can be critical to the following Fall’s numbers.  It can be hard on all animals with deep snow, limited food availability, shortened days and the bitter cold.  All of these increase the need for more food to keep the metabolism going and body heated up.  It’s a vicious cycle and this is not seen more readily than in the winter life of the ruffed grouse.  Ruffs, like other animals, need food, shelter and protection from predators to make it through our northern Michigan winters.

As winter sets in the grouse will feed twice a day and move into the thick berry shrubs and mature aspen stands (usually 16+ years old).  Specifically, the grouse prefer male aspen buds as they are higher in protein than the females.  This becomes especially important when the temperature dip down to 20 degrees or lower.  At that temperature, grouse experience a rapid increase in metabolism which requires more food to stay warm and survive.  These mature male aspen buds are the best bang for the buck.

Shelter and protection for grouse are much the same as we get into winter.  Grouse will continue to roost in protective trees such as pines until we get around 10″ of snow.  At that point, the phenomenon knowns as snow burrowing starts.  This is when a grouse flies into a snowbank (usually at the base of a tree).  Then, it moves up to 20 feet left or right to roost.  Snow burrowing is critical to the survival of the grouse for two reasons.  First, it hides them from avian and four-legged predators.  Second, it helps the grouse stay warm (above that 20 degree mark) in its snowy cocoon.

This lateral movement keeps any predator wondering where the tasty morsel flew to.  Each day the grouse explodes out of its burrow to find sustenance and returns at the end of the day to a new snowy burrow.  I say “explodes” because if you have ever been next to one coming out of its burrow, it is 10 times more adrenaline-pumping than a fall flush.

While snow burrowing is critical to the survival of the ruff, it can be deadly.  Warmer days that melt the top of the snow pack followed by very cold evenings will cause a layer of ice to form on top of the snow.  This is dangerous for the ruffs.  They either get caught in the burrow and die, or hit the refrozen snow when returning to roost and die.  It is biologically important since they still practice the ritual.  In years where the grouse are able to snow burrow starting in December, it many times results in higher numbers the following Fall.

It is almost the halfway point of the winter and until this most recent polar vortex, we have had some very cold days and nights without considerable snowfall.  There has been very little snow exceeding 10″ to protect the grouse from predation.  Many nights have had frigid temperatures.  The birds have been fighting all winter to survive and find food.  Many have likely been forced to continue to roost in pines and swamps.  This brings more exposure to frigid overnight temps and to hawks and owls, their two main predators.  Will this affect grouse numbers?  Only time will tell.  Last winter was mild and my clients and I had good numbers this season.  The Spring freeze/thaw cycles and brood survival will tell us more as we get on the other side of winter.

What I can tell you is that it is a perfect time to work on your pup’s obedience drills and just enjoy the time with the family because before we know it April 1st will be here and chukar season will be upon us at Thundering Aspens.  Chukar season is a great time to get the cobwebs out from between your pup’s ears, tune up him or her up and even get that young dog out on some great birds that hold for the point and fly strong.  Make a cast and blast day of it and get on the river for some spring steelhead as well!