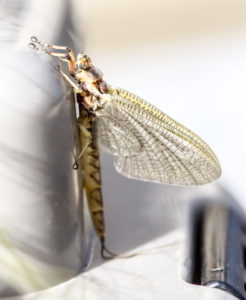 The most highly anticipated may fly hatch in Michigan is the hex hatch. These big mayflies bring the largest fish in the river up to the surface to feed. Hexagenia Limbata is a floating filet mignon to a trout. Therefore the Hex Hatch, whether duns or spinners probably produces more large trout caught then all other dry fly hatches combined.

Hexes hatch, mate and die primarily in the dark in late June. Imagine hearing, not seeing, a fat 24-inch brown slamming the surface. As a result it can some of the most exciting dry fly fishing of your life!

In rivers the source of the hex hatch, hexagenia limbata is a two-year mayfly. When the eggs are deposited by the dying female spinners the resulting nymph will live two years before beginning the cycle again. As a result of this longer nymphal stage the hex nymphs are quite large. Size 6 or 8 hooks are used.

Hexagenia nymphs live in silty muck that they bore into with a u-shaped tunnel. They are nocturnal and only come out to molt. Which they can do 30 times before hatching.

The hatch usually begins during the last light of the day. Probably because of their size, after splitting the exoskeleton and struggling out, they stay on the water longer than most mayflies. Therefore they are very vulnerable to trout. In addition, hatches occur usually on muggy warm nights making the drying of wings more difficult. After leaving the river and spending one to three nights in the trees they become mature adults with clear wings and longer tails. When the sun goes down the flight takes off. You will see sometimes thousands of bugs flying upstream prior to mating and dying.

The hex, known in the past as the Michigan Caddis or the Fish Fly has thousands of imitations. Many “tourist “patterns

have big, bushy white wings. Many are oversized and not very realistic. My favorite patterns are very realistic. I like a pattern, Robert’s Yellow Drake, a Brown Drake imitation tied larger for both duns and spinners. I’m also a big fan of Ed McCoy’s All Day Dun and Boondoggle Hex patterns.

Finally, regarding patterns. The further into the hatch you go the more realistic the patterns need to be. This is due to the fact that every fish in the river comes up to eat Hexes. Consequently, they have all been stung by hooks. Make sure you carry some realistic patterns or you will get refused by bigger trout.

Look for hexes to appear on lakes in northern Michigan in early to mid-June. They will start on the rivers 7 to 10 days after they hatch on the lakes. Timing is usually mid-June to mid-July.

Our resident Bug Expert, Ann Miller, author of Hatch Guide for Upper Midwest Trout Streams has the following to say about Hexes.

“Hexagenia nymphs can live in both lakes and streams, so Michigan has plenty of good habitat for them. Temperature plays a key role in their development – nymphs living in the warmer regime of a lake typically develop in one year while nymphs in cooler stream regimens can take two years to mature. While peak emergence of Hex duns is in mid-June, late cohorts are sometimes observed in later summer and sometimes even early fall, likely due to developing in cooler microhabitats. The large body size of the female is full of eggs produced from two ovaries. The number of eggs can vary and is  directly correlated to body size, but a typical female will produce upwards of 4000 eggs! Once mated, most female spinners will fly low back and forth over the river or lake before plunging to the water surface and discharging their eggs.”

First of all, you are fishing in the dark, the darker the better! Shorten everything up. I use a 2X, 6-foot leader with no tippet attached. Wade as close to the rising fish as possible. Be safe but get close. Remember it’s dark! Finally, every cast should be a reach cast. Your enemy in the dark is drag so learn and use the reach cast.

When you get hooked up to a big fish in the dark drag them in. No fancy fighting, just put the hammer down and get the fish in the net! Not only will you land more big fish but you will be easier on the fish. During the hex hatch water is usually warmer and holds less oxygen. Getting the fish in quick helps them survive.

Michigan has a huge amount of Hex water available to anglers. The Manistee, AuSable and Pere Marquette all have areas with large numbers of hexes. When looking for hex waters watch out for black muck. The stuff that sucks you in and tries to take your wading shoes is hex habitat. Even waters that are generally faster, riffle type environments will sometimes have hex pads in back eddies.

Due to the preponderance of hex water in Michigan there are many rivers and lakes, big and small that will produce great action. Get out your bigger dry fly rods, tighten down your drag and go get them!